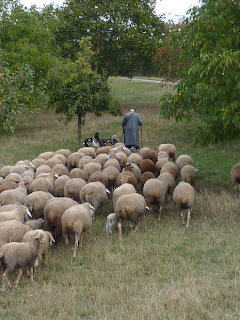 Moses, the man God used to lead His people out of Egyptian bondage, spent forty years in the desert as a shepherd.  In Exodus 4, we find God speaking with Moses at the burning bush as He prepares his servant for the coming challenge.

In verse two, “The LORD said unto him, What is that in thine hand? And he said, A rod.”

Did God ask this question to get information from Moses?  Of course not; He was drawing Moses’ attention to the object that he was holding.  Doubtless it was a common shepherd’s staff that Moses used in his daily work.

God took what Moses already possessed and used it in a miraculous way.  Just as I asked myself, so I ask you:  What is in your hand that God can use?  To you, it may be an ordinary ability or an insignificant talent, but God can use it to minister to others.

I also note that it is only when Moses let go of the rod that God was able to use it for His purpose.  Is there something to which you or I are holding too tightly?  Are you afraid to give God your time, your family, your future – afraid of what He might require you to do?  Just as God told Moses to release the rod that He might reveal His power, so God asks us to surrender all to Him that He might work His will in our lives.