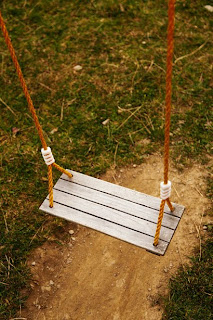 I sat in the car, parked in front of the school playground, waiting for my daughters to finish their after school art class. I watched a small five-year-old boy sitting alone on the swings. With all the intensity he could muster, he focused on pumping his legs.

His progress was so slow; at first the swing barely moved at all. Back and forth he leaned, pushing and pulling with all his might to get going. I wanted to step to his aid, get behind him and send him soaring with one big push.

Yet as hard as it was for him to do it himself, I recognized the importance of leaving him alone. Sure, it would be much easier for me to assist, leaving him nothing to do but enjoy the efforts of my work. But what profit would there be for him in taking that route?

No, it was something he needed to learn to do himself. After all, how else could he get that boost of self-confidence that swept through him once he finally got going? His big grin wouldn’t be nearly as meaningful if someone else had done it for him.

As I watched, I thought about how necessary it is at times for me to stand back and let my children struggle. There are things I could do that might make it easier for them today, but in the long run would actually hinder their development. Acknowledging that they may fail, yet encouraging them at every turn will help them mature into a person who can persevere through difficult circumstances and empathize with others in similar situations.

While I’ll always be there watching and praying, sometimes they must step out and attempt something on their own – an unfamiliar skill, a public performance, a new relationship. And I will let them try and, yes, even sometimes fail – not because I don’t love them, but because I do love them so very, very much.