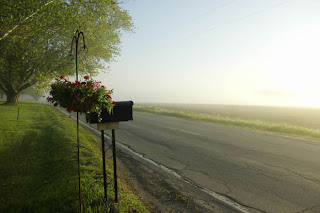 There’s a certain anticipation that comes with opening a mailbox – not just the kind you click on, but the old fashioned one that perches on a post at the end of your driveaway.  It begins when you’re a child, reaching into the box eagerly, pulling the mail out piece by piece to see if anything bears your name.
During our college years, my husband and I were separated during the summer; he was in Georgia, I was in Virginia.  In those days before cell phones and e-mail, we communicated by once-a-week phone calls and more frequent letters.  He was faithful in writing and my heart would race when I saw his familiar scrawl on the envelope.  Opening it up, I’d scan the letter first and then settle in for a second (and sometimes third and fourth) more thorough reading.  Just seeing his handwriting across the pages made him feel nearer.
For ages, people have poured out their feelings for one another on paper.  Next Tuesday, I plan to begin a series of open letters here on Girls to Grow.  While they’ll be typed on a computer screen instead of written in ink, I hope to accomplish the same thing.  I’ll share my thoughts with people from my past (former teachers), my present (family and friends), and future (son-in-laws to be) and give you a glimpse of what they would find in my letters to them.

And yes, I still have those letters from my husband, packed away with other mementoes from those dating days.  How about you?  Are there letters from someone special that you’ve saved?