I have long been a fan of Ronald Reagan. He was the first American president that I was old enough to pay attention to and I remember watching his speeches on television with my family. The way that he spoke, the words that he said and the authority he portrayed made me believe that he was a good man who loved our country and wanted only the best for it and its people. 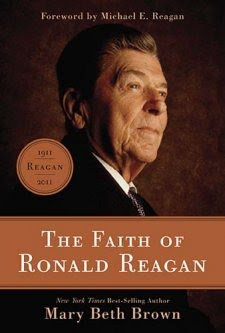 The Faith of Ronald Reagan by Mary Beth Brown traces the life of the late president, relating the spiritual influences on him, quoting family members and close friends, and showing the depth of his personal faith through speeches and writings from Reagan himself. These are interwoven with the major events of his life and show how his Christianity guided him in so many arenas.

Having previously read several books about Reagan, there was little new here when it came to historical information, but reading through the lens of Reagan’s faith gives the reader a different perspective on the events of his life. I did enjoy the chapters on his childhood and the portrayal of his mother, Nelle, a seemingly strong Christian woman and Godly example for her children. Many familiar quotes from his most famous speeches were included. One of my favorite sections was the eulogies from his funeral that are included at the end of the book.

All in all, I believe that the author accomplished her purpose of showing Reagan’s devotion to God throughout his life and how he allowed it to permeate his daily actions.

I was provided with a complimentary copy of this book by Thomas Nelson Publishers. All of the opinions expressed in this post are my own and I was not compensated for this review in any other way.